Mitragyna speciosa is a tree in the coffee (Rubiaceae) family, commonly called Kratom. Native to Southeast Asia, it has been used traditionally used in Thailand and Malaysia to treat pain and other maladies, a practice documented since the 1840s. While its ethnobotanical use consists of teas and fresh leaves, recent surges in popularity in the U.S. and Europe have created a new market for kratom to treat pain, opioid use disorder, and opioid withdrawal 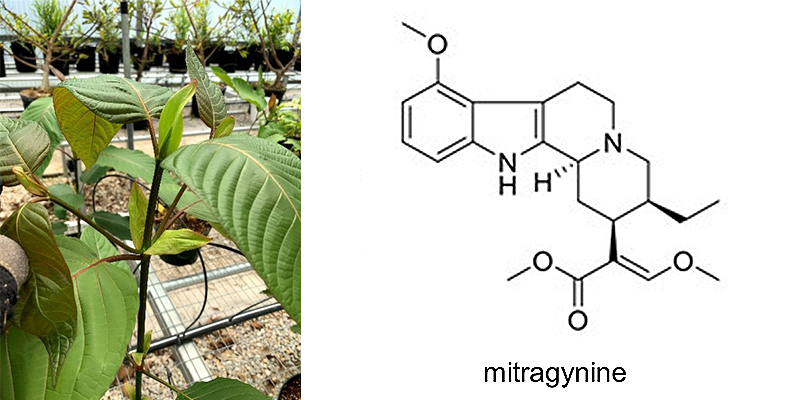 Mitragynine, a unique alkaloid produced in the leaves of this species is a compelling candidate to take on the current U.S. opioid epidemic. As a result, there is research interest in the elucidation of the metabolites with medicinal properties in Mitragyna speciosa and the biochemical pathways that contribute to their formation. We are interested in defining the genetic basis of alkaloid biosynthesis and understanding the genotype x environment interaction on the metabolite profile. In collaboration with the UF College of Pharmacy, we want to optimize the alkaloid production through, controlled environment production and metabolic engineering using gene-editing by CRISPR/Cas9.

Scutellaria spp has tremendous potential for the ornamental and medicinal plant industry in Florida. The root extract of S. baicalensis has been widely used for medicine in Asia for over 2,000 years, and it has a variety of bioactivities, e.g., anti-inflammatory, anti-cancer and neuro-psychologic properties due to synthesis of unique flavonoids and indolic compounds. Commercially, it has a

market for ornamental and medicinal applications including supplement capsules, dried plants for tea, powdered or liquid extracts. Florida native species, S. integrifolia and S. arenicola also synthesize these active medicinal compounds and in order to develop Scutellaria crop as a new enterprise crop, we need to identify germplasm and best production practices, while evaluating the metabolite profiles under controlled environments to maximize the synthesis of active pharmaceuticals. This project is a part of a new UF team “MICE (Medicinals In Controlled Environments)” across UF IFAS and College of Pharmacy

Gene-editing by CRISPR systems provide an unprecedented advancement in genome engineering due to precise DNA manipulation. Genome-editing is being widely applied in plants and has revolutionized crop improvement by offering the ability to generate transgene-free plants. Tremendous progress has been made recently to increase the specificity of CRISPR reagents by structure-guided protein 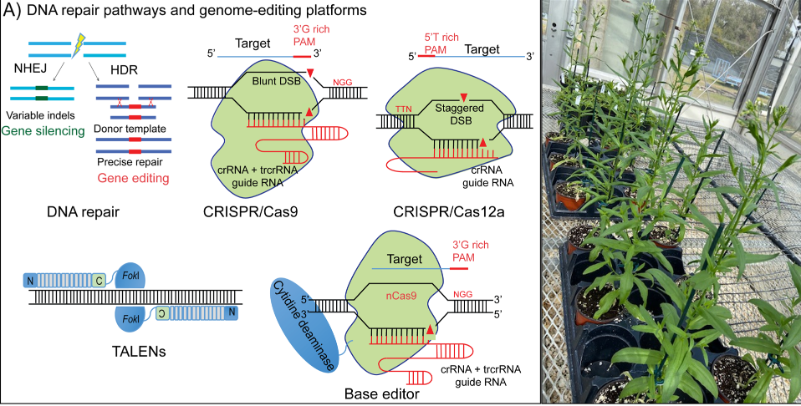 engineering to develop variants of Cas9 such as hyper-accurate Cas9 (Hypa Cas9). As alternative CRISPR-Cas12a is also emerging as an effective reagent for gene-editing in plants. Base-editing technology based on CRISPR/Cas9 system generates base substitutions without requiring dsDNA cleavage. There are no studies to date that characterize genome-editing reagents’ specificity in plants. The recently streamlined regulatory processes by the USDA opened up new opportunities for scientists to develop improved crops and useful agricultural products. Therefore, there is a need to be able to effectively assess this emerging technology in terms of genome-wide off-target effects before it is applied to new crop varieties. As a part of USDA – Biotechnology risk assessment Grant project, we will use CRISPR/Cas9, Cas12a, HypaCas9, base editors and TALENs to target economically important candidate genes in vegetatively propagated potato and seed propagated Camelina sativa, an alternative oilseed crop in order to quantify the frequency of off-target variation caused by gene-editing reagents by whole genome sequencing. This study would provide comprehensive risk assessment of gene-editing in crop species.

Although CRISPR/Cas9 has been applied to various crop species, its application in medicinal plant species has been limited, mainly due to lack of genomic resources and established genetic engineering protocols in various species. With recent efforts in development of genomic resources, for example Mint Genome Project (http://mints.plantbiology.msu.edu/index.html) would facilitate studies on evolution of specialized metabolites in the Lamiaceae family, genes contributing to their diversity in phenotype and chemistry. Functional characterization of biosynthetic enzymes has mostly been done in heterologous expression systems. However, in order to achieve pathway engineering by manipulating the metabolic pathways and regulating the metabolic flux to produce increased bioactive compounds, established plant genetic transformation and gene-editing protocols would be important along with the availability of genomic resources. We are interested to explore these possibilities in medicinal plants specific to our study.